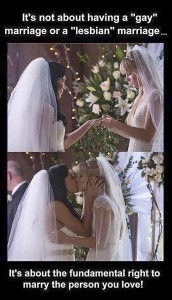 The right to your choice for Love

A friend raised the spectre of opinions from the Gay community who don’t support the marriage rights debate.  She said, “I have had three different people say to me this week on the subject of same-sex marriage that ‘lots of gay people are against it you know’.”

Denial by the unengaged

She reflected that just because you are part of a community seeking justice that it doesn’t give one “special privilege” to deny the rest of your community a right, any more than it does for them outside of it.  I am sure there were “blacks” in the “South” who thought emancipation was inappropriate for their community and that slavery was “normal”.  Also, I suspect this is a failure by “different people” to recognise the individuality of people and lump all “Gays” into a homogenous lump. Where the opinion of one “Gay” person represents the view of all and then pretend the years of protest and numbers of people who hold a different opinion are irrelevant because … “I have a gay mate who says he doesn’t care.”  How completely lacking in insight, and affirming of their gay bias is that?

The reality is that lots of heterosexual and homosexual people are not interested in the institution of marriage.  So what? How exactly is that relevant to the conversation of the rights of people to choose and to have a choice.  If you as an individual independent of your sexuality decide not to engage in marriage, why does that, therefore, give you the right to deny it as a choice for others?

I am a parent; it is something I choose to be, that many married people don’t want and some can’t have. There are people in the world but choose not to be parents, that is their right too.  When you consider that “IVF” is one of the most googled “word” in Australia, for many married adults “generating” children “normally”, is not even a physical possibility.  Marriage is not about children; it is about a relationship between two people.  A surprising discovery for many (especially the proponents against marriage equality) is, Children, are not in the marriage vows!  Placing Children into the marriage equality argument, is a complete distraction, a “strawman” argument. It seems like I am talking to simpletons to point out that there are lots of married couples (older, infertile & simply not interested) that have a marriage that does not involve children at all! People & couples have a right to choose to be without children, as they should have a choice about whom they love.  The issue, in either case, is – a right to a  choice.  Eric Abetz suggest we should think of the Children when deciding about Marriage equality and I agree with him on that!  Although not the conclusion he reaches, that it is a prohibitive argument.  A news item for Eric: Gay couples already have children!!! What they want to provide their children with are the security of legally and emotionally married parents.  Plenty of anomalous relationships from gay to single parents raising kids in our community. I’d ask Eric what his government is doing to help out, but I already know how difficult you are making it for them all.  The high rate of failure of “straight marriage” results in denying children a mother and father in the ordinary course of life! So Eric’s claim that “study after study” had shown that children benefited from having both, is not only irrelevant, it’s also not true. Perhaps he should read the study conducted by the University of Melbourne researchers that surveyed 315 same-sex parents and 500 children about their physical health and social well being. The results there don’t agree with you, Eric. Don’t take my word for the results, look it up yourself! Of course, if you’re one of Abetz’s bigots you won’t want to read it. Don’t read it; the cognitive dissonance would not be good for you!

Thinking of the children?

Still thinking of the children Eric? I don’t believe so!  Our Church and my son’s school have same sex parents whose kids play in the church, the soccer field and the school play yard with my Son. The kids are happy, funny and even I as a parent think they are great kids.  Give them a secure future.   The issue in the case for having children or getting married is about – a legal right to a choice.  Don’t you like it?  Well, that’s your choice too!  Changing the Law to allow choice doesn’t prohibit your bigotry, hatred, your ranting about being ambushed, OR your acceptance or joy at the opportunity presented.

Each couple should have the right to make that choice, and just because I think it is a “good” or a “bad” thing does not – in of itself – make it so!   To include or preclude for all people a choice is a dictatorship. To presume that one person’s opinion is the “be all and end all” of the conversation is to assume that she/he has dictatorial rights of preclusion of all other opinions.  This authoritarianism is the realm of emperors and kings, and last time I looked; I thought we were a semblance of democracy in Australia.  (OK, some may suggest we are moving to become a fascist state but that is another conversation, and we are not there yet!)  Just because one person or a group of them, does not wish to get married does not preclude the desires of many others who do want to participate. It is the argument of the “fascist” who wishes to dictate his choices upon all others.  And let’s face it, in the conversation about marriage equality, there are plenty of “fascist” style thinkers.  They are wishing to pronounce their opinion as for the only one worth considering and insisting it’s followed.   Even though that choice has no impact on their own lives, either way.  This conversation should be about facilitating “choice for individuals” not “individuals dictating choice“!